About the Yokoim Dictionary by Madeleine Booth 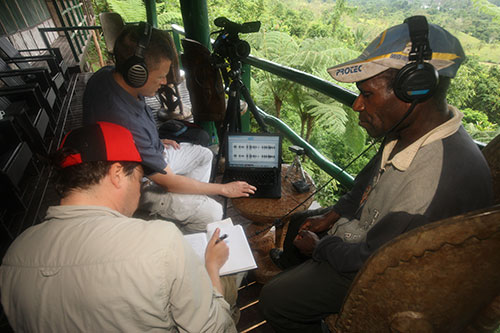 Yokoim, also known as Karawari and Tabriak, is a language of the Lower Sepik family (Ramu-Lower Sepik phylum) spoken by ~2,000 speakers (2009) in the villages of Kundiman, Manjamai, and Konmei in the Karawari river region, East Sepik Province, Papua New Guinea. Yokoim is an endangered language threatened by the spreading dominance of Pidgin (Tok Pisin), a national prestige language. In many communities there remains only a passive knowledge of Yokoim. Interestingly, Karawari area Yokoim speakers claim that their language and that of the larger nearby Ambonwari area Yakwaim speakers are mutually unintelligible and call the Ambonwari Yakwaim language Suŋgat. However, Ambonwari Yakwaim speakers claim that the languages are mutually intelligible and even the same. Evidently, the social aspect of sociolinguistics requires that Ambonwari Yakwaim and Karawari Yokoim be treated as two different languages, and this dictionary will deal with the latter.

The Sepik river area is a humid jungle terrain crisscrossed by rivers (malaj) and creeks. Villages lie on or close to the riverbanks, with houses typically made of wood, built on stilts, and thatched with sago palm leaves (andukas) woven together. Locals use the system of rivers to travel the area in long narrow wooden canoes (kaj). Women sit in the back of the canoe (kondugɨn kaj) with a leaf-shaped paddle (akunbun mɨnaŋ, ‘woman’s paddle’) while men stand in the front of the canoe (mariŋgɨn kaj) with a triangular, pronged paddle (pajnbɨn mɨnaŋ, ‘man’s paddle’). Children sit in the middle part of the canoe (ʧamɨn kaj) along with cargo. 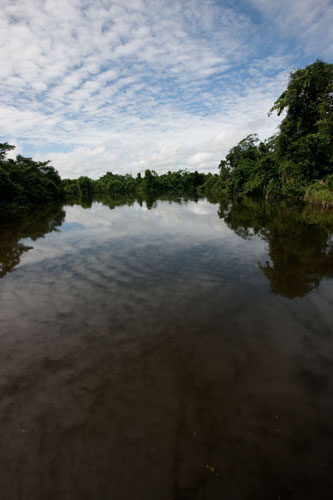 River: view of river from canoe. Photo by Chris Rainier 2009. 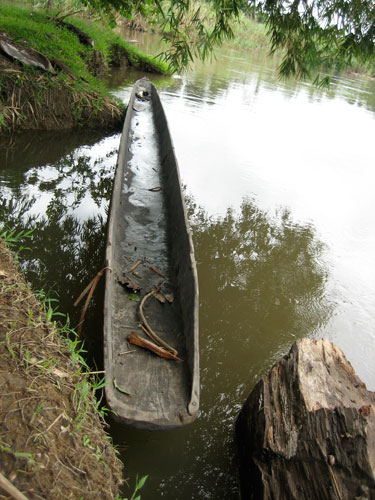 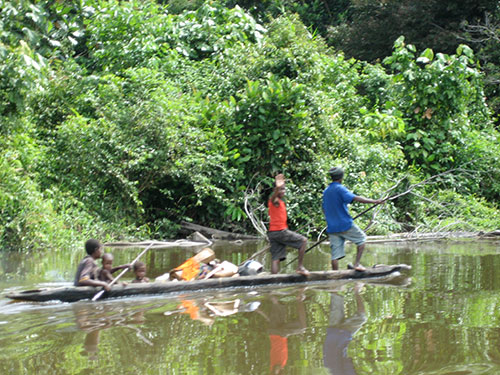 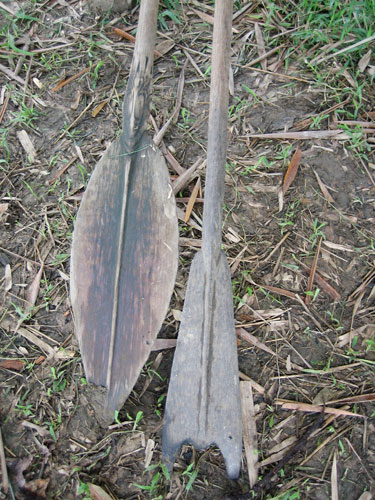 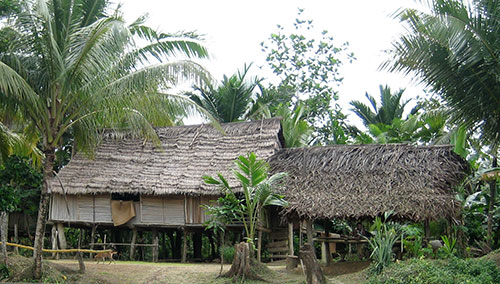 One staple food source for the Yokoim is the edible sago palm (sɨmasɨm, Metroxylon spp.). To extract the edible pith, a sago palm trunk (punʤuŋ or ʧɨmbluk) is first cut into sections and then adzes and staves sharpened into wedges are used to split the bark away from the pith along the grain of the wood. This pith is then processed to produce sago starch pulp/flour (ʧɨgɨs or wambun) and kept in a sago flour basket (jɨmbi or pandigɨm). From this flour, Yokoim make sago pancakes (ʧɨbi) and sago pudding (kalis). Coconuts (imiɲu, jup, or ulaŋ) are also important to their diet. Yokoim fish with three-pronged fish spears (kabaŋ), fish arrows (salukuli), fish trap baskets (jemak), and fish scoop baskets (ʧɨmbaŋ). They hunt various game and keep pigs (ɨmbijen) and chickens (jakwan). 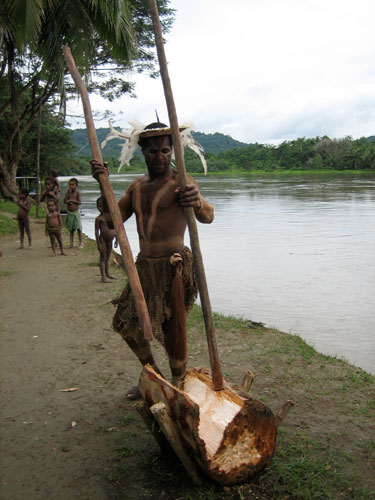 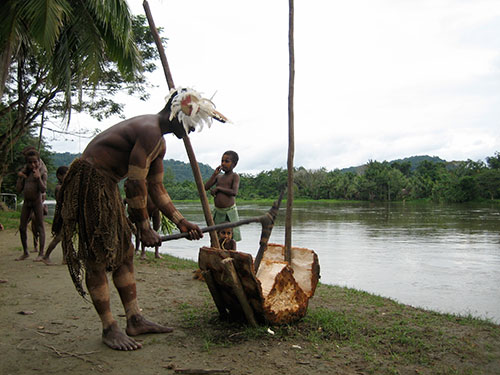 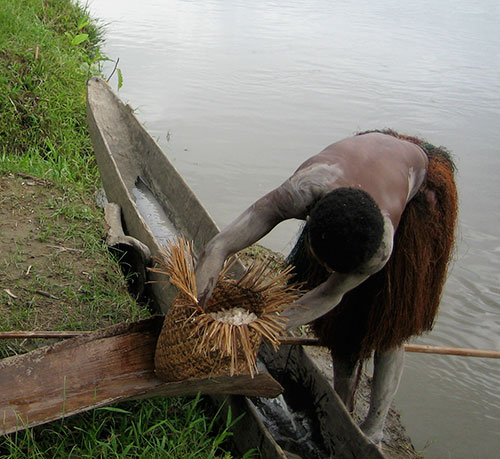 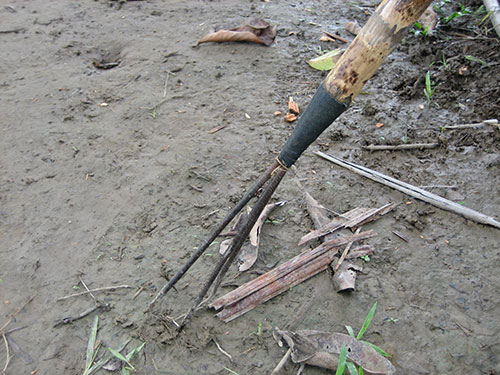 Both men and women ornament their bodies and especially their heads and faces with feathers and red, black, and white body paints (alanandi, angam, and ʧambijaŋ, respectively). Although Western shirts and pants are common, Yokoim men and women sometimes wear grass skirts (abɨnʤɨmbɨrɨm) and children wear leaf skirts (wanʤiŋ) or nothing. 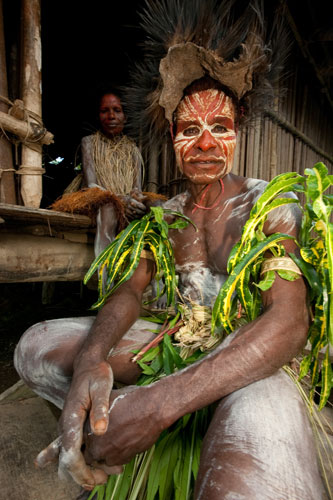 About The Yokoim Language and Dictionary

Sounds of the language

Yokoim is a language spoken by very few speakers, and as such has many phonemes (sounds) that change from speaker to speaker or even from one speaker’s utterance to utterance without changing the meaning of what is being said. Often, the first time a word is elicited, the speaker will say ʧ, like ʧibi. The next elicitation, the speaker might say sipi. Different phonemes that can be used interchangeably without changing the meaning of a word are called allophones. For example, some speakers say klipaj, ‘two,’ and others say kripaj, which means the same thing. Therefore, r and l are allophones in Yokoim, written r~l. In Yokoim, s~ʧ, b~p~v, a~e, ɨ~u, and g~ɣ (a g made very back in the throat) are allophones in addition to r~l. Yokoim also exhibits voicing of stops and fricatives between vowels and other voiced phonemes (intervocalic voicing); for example, klipaj is sometimes pronounced klibaj. Example words:

In this dictionary we have created separate entries for these variant forms, allowing users to listen to different pronunciations. We avoided making one form of a word the standard form (ex. transcribing amenoga, amenogwa, amenagwa, and amenokwa ‘my [coconut-palm-class noun]’ all as amenoga) at the cost of obscuring the underlying unity of the forms.

Yokoim entries were transcribed into a simplified IPA for ease of use. The pronunciation of letters used in this dictionary’s transcriptions is described below:

The Yokoim counting system is base-5 according to the data we have. The words of the counting system vary between speakers, but the mathematical relationship between the numbers stays the same. Interestingly, numbers six through nine or ten are formed with the word mongol which is not attested in the rest of our data. The word jaŋgri, part of the words for ‘five,’ ‘ten,’ and ‘twenty,’ means hand or arm, indicating a body-counting system centered on the five digits of the hand underlying the Yokoim base-5 counting system:

The division of nouns in Yokoim into noun classes appears to be partially semantic (based on meaning) and partially phonological (based on sound). Which noun class a noun falls into affects how it forms its plural and how it agrees with adjectives and possessives:

Verbs in Yokoim agree with both the subject and the object. In English, this would sound like ‘Peter he(subject)-it(object)-cut the tree’ for ‘Peter cut the tree.’ Further analysis and data collection will teach us more about Yokoim grammar. 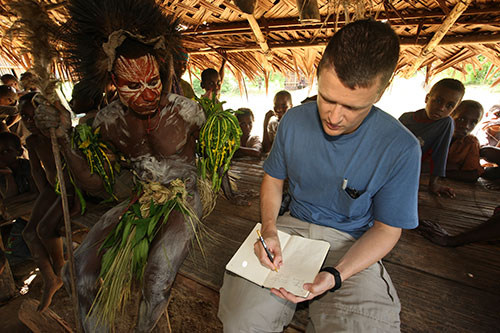 We would like to thank all the Yokoim language consultants for their cooperation and contributions. The research for this dictionary was made possible by the support and assistance of the National Geographic Enduring Voices Project, the Living Tongues Institute for Endangered Languages, and Swarthmore College. All content is under copyright by the authors. Words and recordings remain the intellectual property of the speakers and community. Any questions or comments concerning this project can be sent to talkingdictionary@swarthmore.edu.