About the Wamesa Dictionary by Abigail Crum & Emily Gasser

“My principle of language is this: God gave it, we share it. We can’t hide what we’ve received. That’s not good. We have to share our knowledge with people.”

Wamesa, sometimes called Wandamen, is an Austronesian language spoken in West Papua, Indonesia in the south-eastern Bird’s Head peninsula. Wamesa belongs to the South Halmahera-West New Guinea branch of Austronesian. There are roughly 6000 speakers of the language.

Native speakers call their language ‘Wamesa’ and use ‘Wandamen’ to refer to the dialect, spoken around Wandamen Bay (Teluk Wondama) (Gasser 2014). This dictionary focuses on the Windesi dialect of Wamesa, and is based on ongoing fieldwork begun in the summer of 2011. 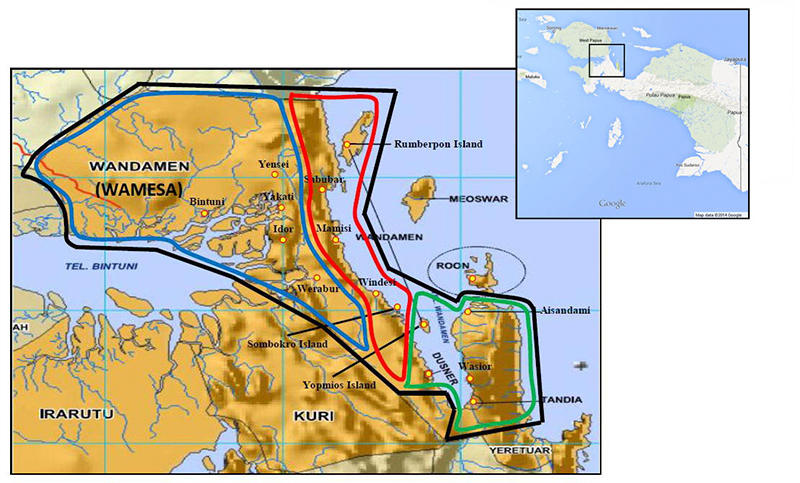 Map of Wamesa dialect regions. The Wandamen dialect is outlined in green, Windesi is in red, and the Bintuni dialect is in blue. From SIL (unpublished), adapted by E. Gasser and T. Karubuy. 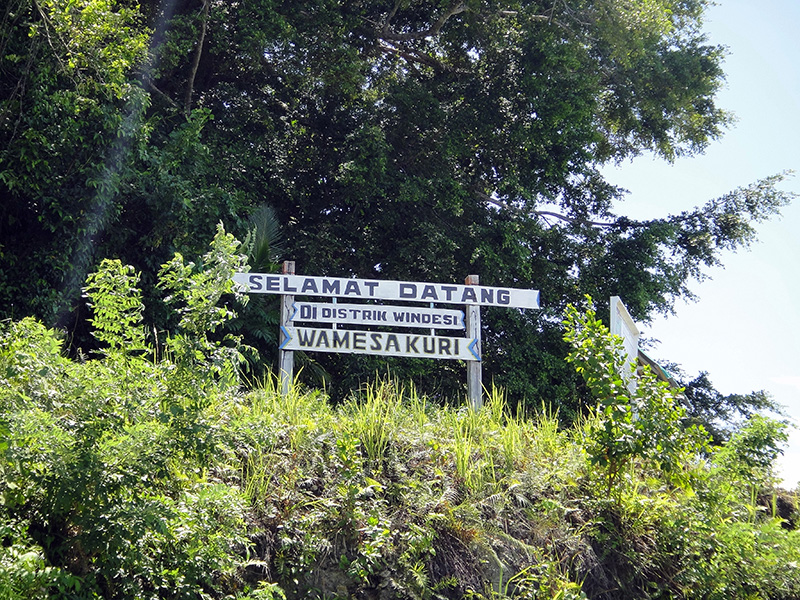 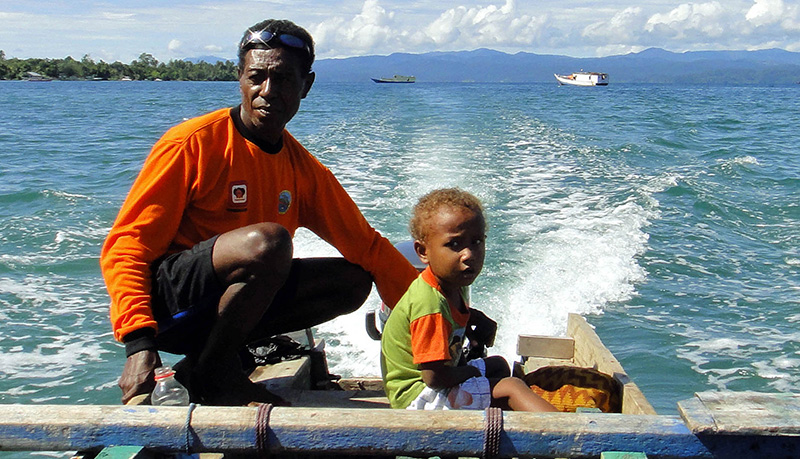 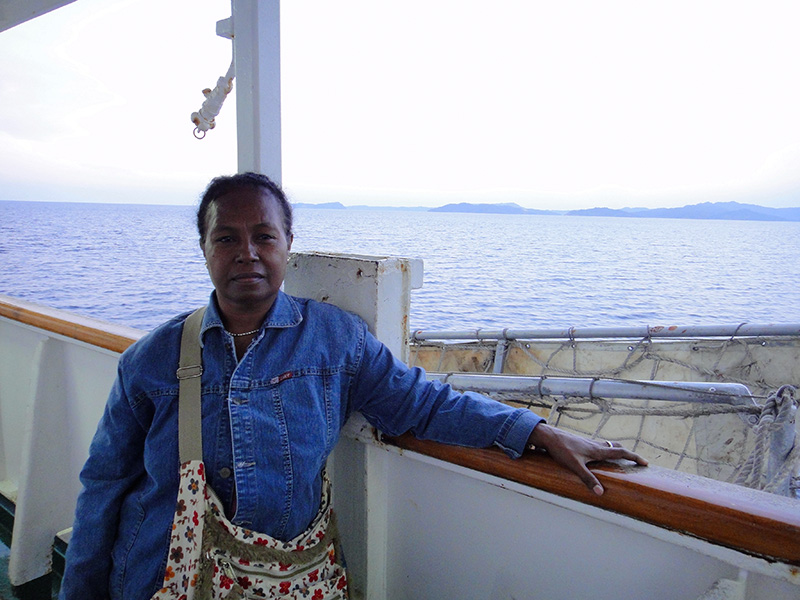 Consultant Ibu Marice Karubuy, on a ship to Wasior. Ibu Ice passed away in November 2016. Photo by Emily Gasser.
Emily Gasser with staff from the Center for Endangered Languages Documentation in Manokwari (Yusuf Sawaki, Cika Tethool and Eny Ronie).

Wamesa also allows a range of vowel sequences, including the following dipthongs and tripthongs: au, ai, ei, oi, ui, ia, ie, io, ua, ui, uo, ioi, iau. A selection of these vowel sequences are noted with Wamesa examples in the following table. Vowel sequences never include adjacent non-high vowels, and unstressed i and u often lenite to y and w adjacent to other vowels (Gasser 2014).

Consonant clusters are allowed in Wamesa but they are limited to homorganic nasal + voiced stop (mb, nd, ngg) consonant + glide, and glide + consonant. Wamesa does not allow complex onsets, so clusters will not occur word initially or finally. Other underlying clusters are simplified in most cases by deleting the first member: /C1C2/ → [C2]. The -- somewhat odd -- exceptions to this rule are clusters ending in v, r, and k, which surface as mb, nd, and ngg, respectively.

Stress is not predictable in Wamesa, except that, when there is only one morpheme, primary stress must occur in a three syllable window at the end of a stem.

Wamesa is an SVO language. Within the noun phrase, the word order is NADQ, or noun - adjective - determiner - quantifier. This is a particularly interesting word order, as it is violation of Greenberg’s Universal 20, and is quite rare cross-linguistically. Like many languages of the region, Wamesa has phrase-final negation.

There are three definite determiners in Wamesa: =ne, =pa, and =wa . These mark literal and figurative distance between the speaker and what is being spoken about. These determiners can also denote the level of association the speaker has with the thing or person being spoken about, and as such are used to form the inalienable possessive construction. Determiners are marked for singular vs plural number if there is no numeral present.

=Pa is used for objects at a middle distance from the speaker. It also denotes third person singular inalienable possession.

=Wa is used to mark something very far away from the speaker. This determiner is the least common among the definite determiners in Wamesa.

Wamesa verbs conjugate to agree with the subject of the sentence in person, number, and, in the third person plural, animacy. There is an inclusive/exclusive ("us including you" vs."us but not you") distinction in the first person, and both dual (two people), and plural (three or more) numbers. The trial (exactly three) is occasionally used, but the verb conjugates exactly as in the plural. The following chart includes affixes for subject agreement with verbs (Gasser 2014).

Other verbal affixes mark the essive, applicative, causative, and some aspects; enclitics give directionality and negation. Serial verbs are fairly common in Wamesa; all verbs in a serial construction must show subject agreement.

We would like to thank all the Wamesa language consultants for their cooperation and contributions. All content is under copyright by the authors. Words and recordings remain the intellectual property of the speakers and community. This work was funded by NSF DEL grant #1153795, the Max Planck Institute for the Science of Human History, and Swarthmore College. Any questions or comments concerning this project can be sent to egasser1@swarthmore.edu.