This Muniche dictionary was compiled by Michael Roswell in 2009-2010. It is based on the work from Muniche Language Documentation Project in Munichis, Peru (summer 2009).

Field research was supported by grants from The Cabaceras Aid Project (http://www.cabeceras.org/), The National Science Foundation (http://www.nsf.gov/), and the Joel Dean Foundation.

The online dictionary contains phrases as well as words. It is designed to provide a sense of the Muniche language. It is possible to hear Doña Donalia Icahuate Baneo pronounce most entries. In some cases, the sound file does not match the transcription exactly. The transcriptions represent the pronunciations agreed upon by speakers in group elicitation sessions. In some cases, Donalia's pronunciation may be a variant, in others, it is a best approximation.

Verb entries are included as full words rather than roots in almost every case, allowing for entries to be linked to the recordings. To see more about Muniche morphology, please peruse the grammar (spanish only PDF). For more information about searching, click here.


In 2008 Lic. Karina Sullón went to the town of Munichis to see if a) there were any speakers of the language and b) if the community was interested in language documentation work. Following her success there and a month of fieldwork the following summer, a team of linguists assembled by Dr. Lev Michael (U.C. Berkeley) went to Munichis for approximatley 9 weeks of fieldwork. That team worked with the Muniche experts Alejandrina Chanchari Icahuate, Donalia Icahuate Baneo, Melchor Sinti Saita, Lidia Icahuate Baneo, Augustina Sinti Saita, Demetrio Chanchari Baneo and Josías Chanchari Marayawa. Alejandrina, Donalia, and Melchor were the key collaborators. For the two months of fieldwork, the team worked together to remember and record words and sentences, gather information about the history of the place and its people, and complete documents about the language.

During the two months of fieldwork, linguists Greg Finley (U.C. Berkeley), Stephanie Farmer (U.C. Berkeley), Christine Beier (University of Texas at Austin), Dr. Lev Michael (U.C. Berkeley), Lic. Karina Sullón, and Michael Roswell (Swarthmore College) lived and worked with community members. Twice a week a group met for four hours in a formal elicitation session. During this time, Alejandrina's daughter in law Noeli supported the group with lunches. Support came also from former town mayor Demetrio Chanchari Baneo and many other community members. The sound files heard on this page are Donalia's voice; the recordings were made for the audio dictionary to be delivered to the community in summer 2010.

At the end of Summer 2009, the team had completed several resources for use in the community. They were a speller/Abecedario, a brief grammatical description  (340Kb  PDF) and a Muniche/Spanish dictionary organized thematically and alphabetically (530 Kb PDF)

Work on the language continues. Lic. Karina Sullón is preparing a master's thesis about the history of Munichis, and Dr. Lev Michael, Greg Finley, and Stephanie Farmer are preparing a paper on Muniche phonology.
This dictionary is Michael Roswell's senior linguistics thesis. It was made possible by the work done in summer 2009 in Munichis, and also from the support of the Swarthmore College linguistics department. Particular thanks are due to advisors K. David Harrison (Swarthmore College) and Lev Michael, Kit La Touche who built the database,  and Jeremy Fahringer. 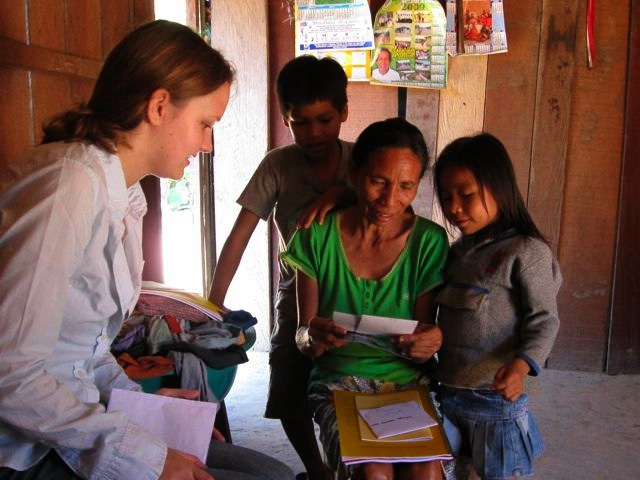 All comments, corrections, and suggestions welcomed at mike.roswell AT gmail DOT com.