About the Jeju-eo Talking Dictionary

Jeju-eo*, also known as Jeju Dialect or Jeju Language, is a variety of Korean that is considerably different from standard Korean and the more widely known satoori (사투리), or regional dialects. It is spoken on the island province of Jeju, which located about 60 kilometers south of the Korean peninsula.

Native speakers of Jeju-eo number fewer than ten thousand, and most are over the age of 50. In 2011, UNESCO classified Jeju-eo as a critically endangered language, bringing more attention to the situation this language community faces. A Jeju-eo-to-Korean dictionary has been published, and some domestic efforts toward revitalization have begun in the past few years, such as the establishment of the Jeju Development Institute. However, a widening cultural and generational gap is hindering progress.

Since standard Korean is used in schools and spoken by all inhabitants of the island, Jeju-eo is quickly losing ground. Children are only taught the language in some local after-school programs; in general, they view it as the language of their grandparents. Thus, the younger generation can be said to be passively bilingual: they understand Jeju-eo when it is spoken to them but cannot produce it themselves.

Jeju-eo is closely linked with the traditional shaman culture of Jeju Island. A rich, passionate, and deeply sacred heritage as important to Jeju Islanders as the land itself, Jeju shamanism is dying out as the shamans, known as mudang (무당) or sinbang (신방), grow older and their religious rituals become less sought after. Modernity and the fast-paced, forward-thinking lifestyle of contemporary South Korea are putting Jeju-eo at risk of extinction. 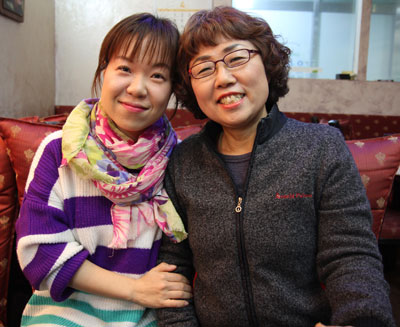 This project was additionally funded in part by the "FKAF Research / Castleberry Grant" which is awarded by the Fulbright Korea Alumni Fund (FKAF), associated with Fulbright Korea or the Korean-American Educational Commission.